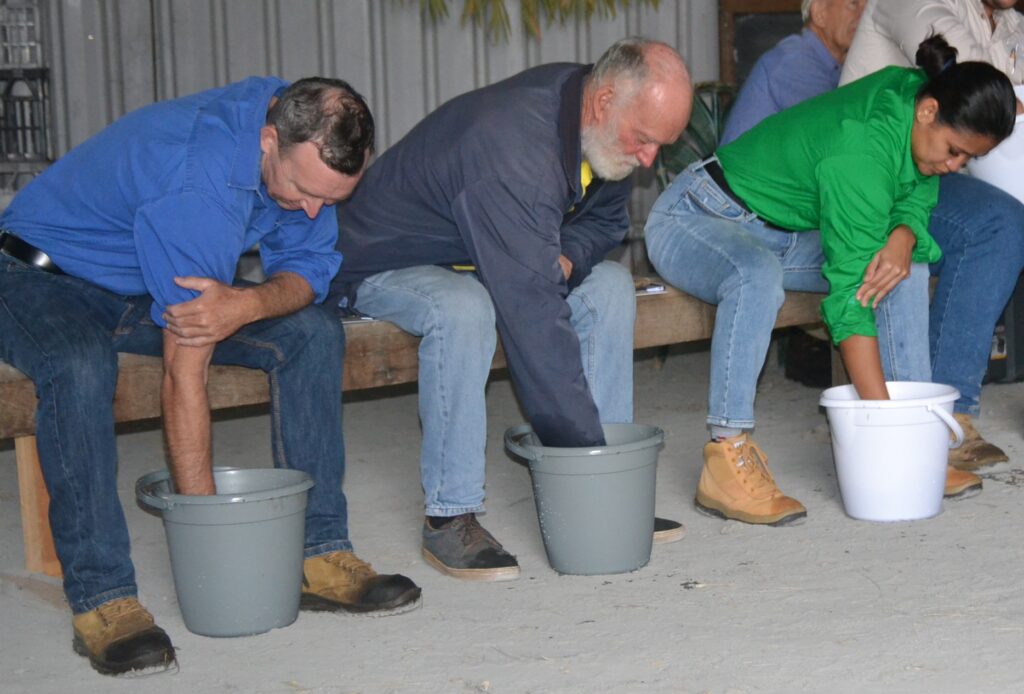 Mark  Pye (Preparations Manager), Kaz Selbie (News Leaf Editor) and myself (News Leaf Associate Editor) recently travelled to Shane Joyce’s Kilkivan Qld property Kumbartcho for his and his business manager, Juli May’s workshop Biodynamics & Beyond. We attended as participants rather than as presenters.

The weekend tellingly coincided with Mothers Day, and the symbolism was not lost on us as Shane and Juli (Kumbartcho Enterprises) shared their knowing and experience in nurturing a return to health of both land and human beings. In principle, these are one and the same; universal energies.

It was also the first outing of Kumbartcho Enterprises workshop manual, a 23 page document, the contents of which I consider to be of immense significance to both biodynamics and syntropics.  When I returned to Bellingen clutching this new prized possession, I felt a strong sensation of expansion, coupled to relief that orthodox biodynamics (arguably a sacred cow) has at last been freed into a wider context.

No longer do I ruminate on fitting biodynamics into the “frozen forests” of permaculture (Shane’s term for the present day Crystal Waters landscape), or the regenerative grazing creations of Charles Massey et. al., but after seeing what is unfolding at Kumbartcho, am an enthusiastic convert to Shane and Juli’s version of syntropic agroforestry.

Kumbartcho Enterprises grew from the shared vision that being healthy is our birthright, our innate intelligence, the same as the land. The regeneration of the landscape is affected by the human health journey and vice-versa. Juli May’s Maia Movement is a concept free way of living, where, when in alignment with gravity and earth force, our whole being is response-able to our innate intelligence… our innate intelligence is one and the same as the earth’s innate intelligence. We have managed to get too far from our natural rhythms and abilities, through doings, practices and remedies (inputs), leaving us endlessly seeking the next great cure. Health is living without inputs; returning to health can be done with minimal inputs, releasing us from our dependency on inputs.

Shane’s Winter 2022 News Leaf article From biodynamics to syntropy in my opinion should be required reading for everyone involved in biodynamics, even if it is not immediately applicable to their particular land use. When walking through Kumbartcho’s systems, one senses echoes of permaculture, Inga alley cropping (starring the amazing icecream bean tree), and other syntropic models involving highly diverse plantings from lettuces to trees!

Within the workshop manual lurks a distillation of Shane’s wisdom from years of observation, study and lateral thinking. There’s an account of his impressive plant polyculture, especially regarding understanding the role of weeds and tolerance of them; diverse farming practices related to future income producing livestock and “crops”; and a most accessible explanation of biodynamics and how the biodynamic preparations fit into the operation of this regenerative and highly productive ecosystem.

One of the first issues Shane addressed when coming on to this property eight years ago was installing a “Peter Andrews Natural Sequence Farming” water retention and infiltration system based on the creek flowing through Kumbartcho. At the workshop they took us on early morning walks to see how parts of this are working, also to inspect the various syntropic plantings, and to walk the dogs! The rock gabions athwart the stream bed are clearly working as intended, and there is already a major change to the hydrology regime of the riparian zone as well as adjacent parts of the farm.

The major characteristic of Kumbartcho I observed was that Juli and Shane’s version of biodynamically boosted syntropic agroforestry is truly wholistic. His comment to me when I asked what he’d do about the “outburst” of nutgrass in one recently planted out alley following the limited cultivation necessary, was along the lines of: “We won’t be pulling any out. The biology will fix it eventually, and meanwhile it’s part of the larger photosynthesis and root exudation which is going on.” Generally speaking, Shane’s approach to weeds is based on Cocannouer’s Weeds Guardians of the Soil, which means that all the weeds in the system are welcome as they have a role to play. (This led me to offer a negotiation with the cane toad group soul to move them off the property, but he declined, declaring that they will find their niche and fit in also.)

It was wonderful to hear that Shane and Juli are employing intention as a significant tool in establishing the system. This doesn’t mean that horns are not being buried for horn manure and horn silica, or that manure plus preps are not being pit composted to make soil activator – as pictured herewith. It’s just that both the physical biodynamic preparations and also intent are being put out opportunistically. Thus the unseen realm of both intent and elemental beings is being addressed in this creative environment.
We were indeed privileged to have a good look at the early stages of this syntropic development, accompanied by a clever interpretation and extension of Steiner’s “indications”. His first child, #biodynamics, has given birth, courtesy of the team at Kumbartcho Enterprises, to #Steiner’s grandchild! So apt for Mothers Day at Kumbartcho…

We use cookies on this site to enhance your user experience. By continuing, you agree to their use. For more information please view our Privacy Policy.